Cinema is a widely used form of entertainment. children learn positive and negative values from movies. Discuss both views and give your opinion.

Although there are a plethora of entertainment’s sources available in this modern era, watching movies at the cinema is gaining popularity day by day. According to a camp of society going to the cinema leaves a positive impact on juveniles. However, another group of individuals argues that it teaches the wrong values to kids. According to my point of view, both arguments need proper scrutiny. In this essay, I will discuss it in the following paragraphs. 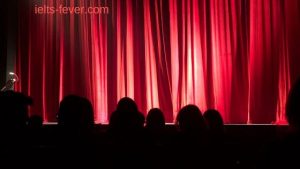 On the first side, some humans believe that immature persons get an incredible effect when they go to the cinema to watch movies. The first and foremost positive influence of it is that it works as a stress buster for offsprings. Because every time, they indulge in their academics, extra-curriculum activities, competition, and so on. This puts a great burden on their minds. Thus, whenever they have leisure time, juveniles go to the cinema. As a result of it, films help them to rejuvenate their fatigued minds.

To add to it, good movies such as biopics leave the profound impact on the students because these type of movies are full of information. These help pupils to broaden the horizons of their knowledge. Thus, learners get the motivation to fulfill their own goals more effectively.

On the opposite side, several individuals tend to think that cinemas have a few worse effects. First of all, going to the cinema, again and again, make children addictive to it. Also, it is a wastage of precious time. In other words, some trainees go to the cinema with their friends or near and dear ones many times in a month and they become habitual to it. So, they avoid their studies and waste their valuable time watching films at the cinema complex.

Apart from it, certain movies or videos contain inappropriate and provocative scenes such as vulgar clips. It impacts to immature persons most. In particular, when children watch irrelevant and crime scenes in films, then, they do the same activities and behave atrociously with their family members. Due to it, kids can go astray from the path.

To conclude, the cinemas have become part and parcel of a human’s life. It helps people to get a break from their busy schedule. According to my point of view, parents ought to fix a time for their juveniles to going to the cinema to watch a movie. Too much effect of the tinsel world on offsprings can lead to the destruction of the fabric of society.