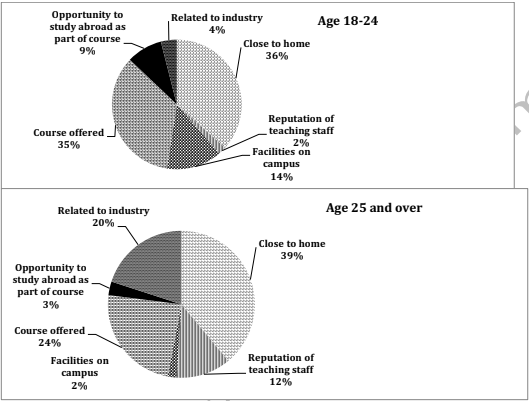 The given pie charts illustrate the information about the different reasons for two groups of learners to choose Dorrifod university.

It can be clearly seen from the pie charts that in age 18-24 the percentage of students is 35% and 36% who choose Dorrifod University due to the course offered and close to home which is the highest proportion as compared to others. After that, the percentage of learners is 14% who prefer to facilities on campus and who choose Dorrifod University for the reputation of teaching staff, related to industry an opportunity to study abroad the portion of students is approximately same at 2%,4% and 95 respectively.

Moving further, in age 25 and over the percent of scholars is 39% who prefer to close to home which is the greatest percentage rather than others. At contrast, the percentile of pupils is 24% who prefer to course offered which is the second greatest proportion as compared to others. Probing further The proportion of students is closely the same 2% and 3% who prefer this university because of facilities on campus, and the opportunity to study abroad as part of the course.

Overall, it is clearly seen that the maximum percentage of students who prefer Dorrifod university due to the and the minimum portion of learners who prefer it because of facilities on campus.

The given pie charts depict information about the different reasons for two groups of pupils to select Dorrifod University.

To elaborate, the main purpose of choosing Dorrifod University but students are close to coming among both ages group of 18-24, and 25 and over is almost the same (36% and 39% respectively). The next reason is the course offered 35% of age 18 to @4 but as compared to ver age 25 less than 11%. Moreover, reasons for the reputation of teaching staff and facilities on campus get exchanging with a few percentages in the second group age.

Furthermore, moving on next age, group of under 24 give the opportunity to study abroad as per of course is 9% but, over 25, decrease with 3%, the first group select Dorrifod university for related to the industry as compares to, second group increase with 165.

Overall, pupils, the main purpose is close to home but as a comparison, the reason for the reputation of teaching staff, and the opportunity to study abroad has the lowest percentage.