Talk about a historical period you want to know more about.

Well, India is a diverse country with a great history. Indian history tells us about historical events which occurred in ancient time. I would take an opportunity to talk about the pre-independence period of India. I describe it briefly. 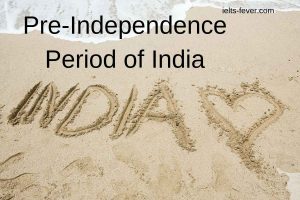 In addition, during this struggle, he met with two other persons, Rajguru and Sukhdev. They started doing their activities in order to get freedom from British Army.
Between this, they were arrested by British officers. The cruel officers hung them on 23 March. On that time, he was just 23 years old boy.

Apart from him, Mangal Pandey and Rani Lakshmi Bai were also put their contribution to India’s freedom war. They tried to save their castle in Bundelkhand. They did many activities to fight with British officers.
With the help of freedom fighters, India got independence on 15th August 1947.

All in all, this is the pre-independence historical period of India and I would like to know more about it.