An increasing number of people eat fast food regularly, it causes a lot of health issues. Some people think the only solution is to ban it completely. Do you agree or disagree?

It is irrefutable that preserved food has become part and parcel of human beings’ lives. In recent years, the consumption of fast food has increased rather than a past time. It leads to a number of ailments in individuals. A group of persons believes that junk food should be banned to ameliorate health problems. I quite disagree with the given argument. I think a ban on fast food is not the right solution to give a healthy life to humans. I will elaborate it in the following paragraphs of this essay. 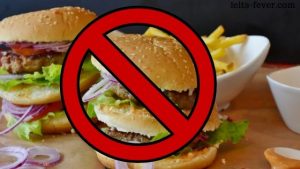 First of all, to reduce the continuous consumption of fast food by persons, the authorities should spread awareness in individuals about the worse effect of junk food on their health. Because many people do not have knowledge about its negative impact on the human body. To mitigate this problem, the government can play an instrumental role because authorities can publish advertisements. Also, a campaign can be organized for manpower where they can learn about a variety of ailments caused by having junk food regularly. Thus, awareness about conserved food will work better than a ban.

Apart from it, the media can help human beings to tell them about the manufacturing process of preserved food. In other words, many times junk food has produced by cooks with their dingy hands in unhygienic conditions. They use low-quality products to prepare this kind of meal. As a result of it, fast food becomes dirty and full of germs. So, the media can capture the whole process of preparing junk food and publish on television. However, if the public sector will put a ban on preserved food, then, it will become impossible for people to eat it. This will make individuals healthy and fit.

To conclude, the regular use of conserved food can lead to many diseases in human beings like obesity, over-weight, and so on. Because it is true that excess of everything is bad. I believe, banning junk food is not a constant solution to decline its consumption. Actually, if the government will put a ban on junk food, then humans will start cooking it at their home. So, the provided suggestions will be proved fruitful to aware masses about the negative effects of the preserved meal.