The tables below show people’s reasons for giving up smoking, and when they intend to give up. Summarise the information by selecting and reporting the main features, and make comparisons where relevant. 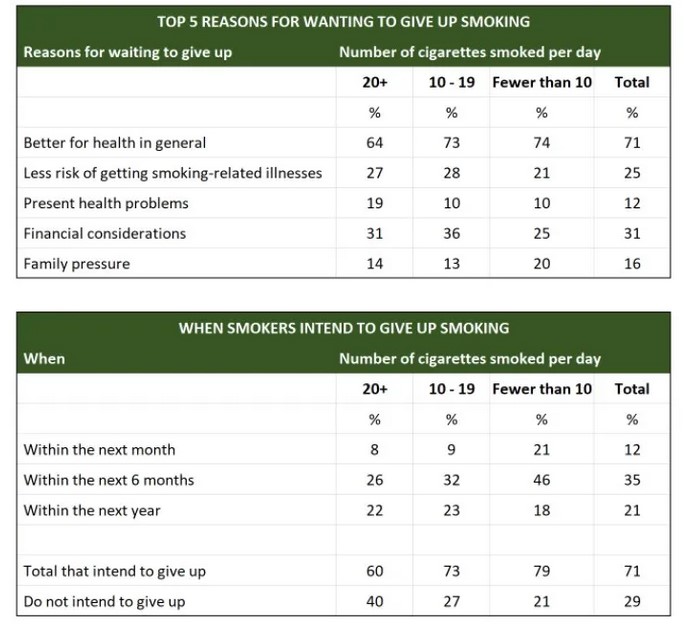 The given table illustrates the people’s reasons to give up smoking and when will they give up. Although it is affecting their health, so they have top 5 reasons and their intentions to give up within the coming months.

Overall, it is seen that the main reason to quit smoking is for better health in general, and it is also seen that their intention to give up within the next six months. In particular, there is an increase in the reason to give up smoking better for health in general with 71% and financial considerations with 31%. However, present health problems are in the lowest priority for them with 12% and family pressure at 16%. Whereas less risk of smoking-related- illness is at 25%.

The graphs depict smokers’ motivations for quitting smoking and the time frame in which they wish to do so.

Overall, it seems obvious that the primary motivation for people quitting smoking is to improve their physical well-being, rather than because they are now suffering from a health problem. The majority of smokers intend to quit smoking at some point in the future.

In the first table, just over 64% of smokers across all categories quit because they want to improve their overall health, followed by economic considerations at roughly 25%-36 percent. A quarter of adults give quit smoking to reduce their chance of developing smoking-related ailments. Finally, the other explanations account for just under 20% of the total.