The Graph shows the information on smoking frequently seen among athletes of Parkview secondary school. Summarize the information by selecting and reporting the main features, and make comparisons where relevant. You should write at least 150 words. 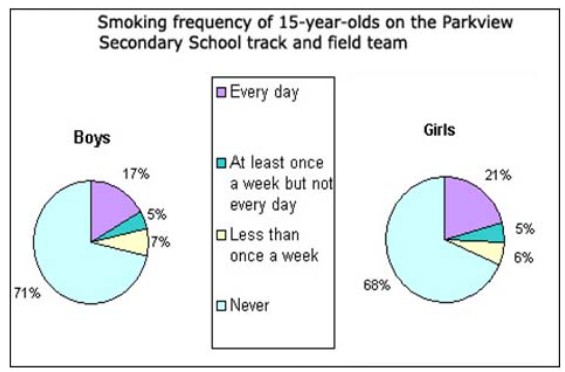 This pie chart illustrates the frequency of smoking in the adolescent athletes that was noticed in their secondary school working hours.

As per the given information, the percentage of girls smoking every day is 21 per cent whereas the rate among boys is 17 per cent. Then, the number of girls and boys addicted to smoking at least once a week is 5 per cent.

Furthermore, the data differed by only one per cent for those who smoke even more diminutive than once in a week between girls and boys. Moreover, it appears that 68 per cent of those never use it. Similarly, boys’ percentage of boys is nearly one-third.

In conclusion, girls who participate in athletic competitions are more used to smoking than boys.

Also, Read The Pie Chart Below Shows Where Energy Is Used in a Typical Australian Household