The pie chart below shows where energy is used in a typical Australian household, and the table shows the amount of electricity used according to the number of occupants. Summarize the information by selecting and reporting the main features, and make comparisons where relevant. 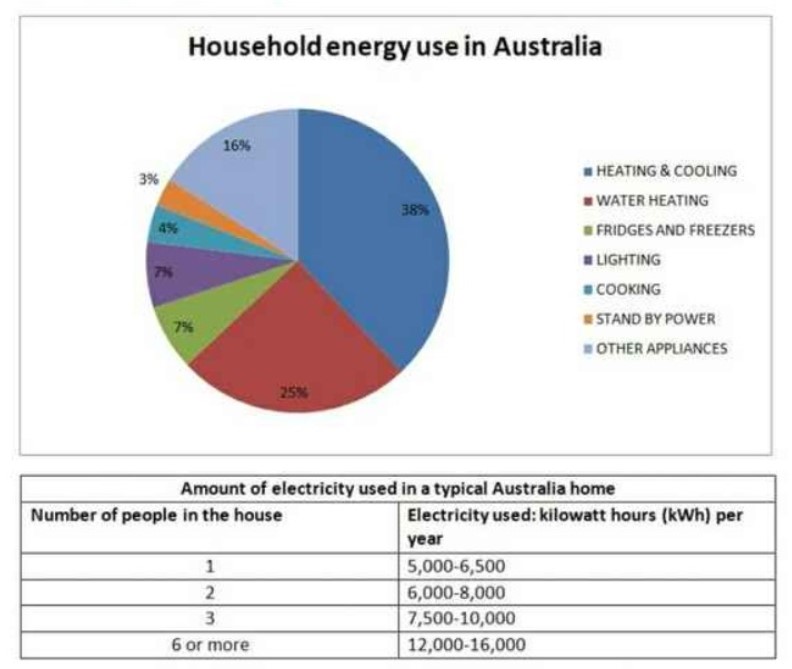 The pie chart compares the percentage of energy used for various purposes by households in Australia. The table graph depicts changes in the consumption of power with an increasing number of occupants in kilowatt-hours.

It is clear from the pie graph that 38% of energy is used for heating and cooling purposes at the peak whereas it is least used 3% for stand by power. In addition, households use 25% of their energy for water heating. Another significant usage of energy is for other appliances in the household. Energy used for lighting as well as fridges and freezers is tied at 7% each. The second least used purpose of energy is for cooking at 4%.

The table chart clearly shows an increasing trend in usage of power as the number of occupants increases. The highest power usage is recorded between 12000 to 16000 kWh in households where 6 or more occupants reside together. The quantity of electricity used by a single person is between 5000 to 6000kWh. An average family of 3 occupants consumes 7500 to 10000 kWh per year.

Overall it is evident that energy consumption for heating and cooling purposes accounts for the highest usage and energy used for stand by power records for the least. Also from the table graph, it is clear that there is a direct relationship between the number of people in a house and the amount of electricity consumed in a year.