The Diagram Below gives information about the Hawaiian Island chain in the center of the Pacific Ocean. Write a report for a university lecturer describing the information shown. 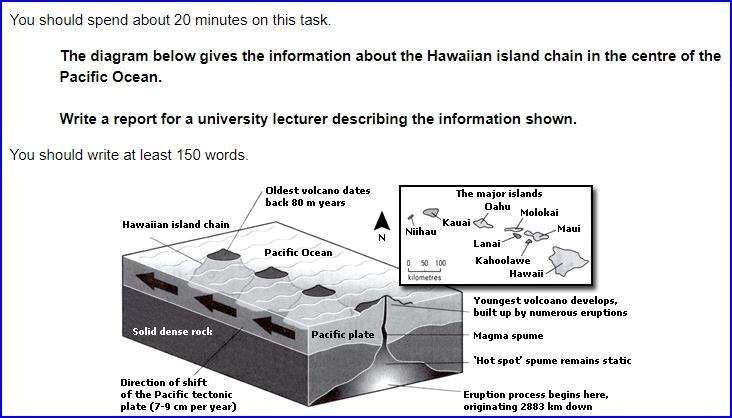 The given pictorial representation reveals the information about the Hawaiian Islands chain situated in the centre of the Pacific Ocean.

Basically, the chain consists of maximum at Island, which is major. To begin with, the Hawaiian Island chain is the oldest volcano in the world and date back to 18 million years. The ocean consists of a tectonic plate named as Pacific plate .it is observed that the direction of Pacific tectonic plates shifts each year by 7-9 cm.

It is evident from the picture that the ocean lies on solid, dense rock. Although the volcanoes are old enough but due to gradual shifts in the place, young volcanoes are developed, and these build up by the numerous eruptions. This process of eruption begins deep down the Earth’s surface with nearly two 2883 kilometres downwards. Further, at the hot spot, the spume remains static at a particular point when there is a time of volcanic eruption magma spume out from the main vent.

Overall, the diagram reveals the complete process of formation of volcanoes with the direction of plates in the Pacific Ocean