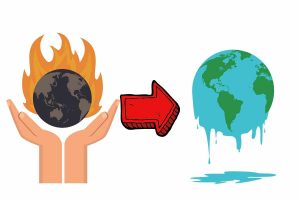 It is irrefutable that global warming is increasing day by day as compared to the past. As a result of it, water level also elevates more than before which create numerous in their daily life. So, I will elaborate on these problems and these solutions in the following paragraphs.

First of all, due to global warming sea level is coming so high which is the main cause of floods. It causes the various problem to humans such as the area of land is reduced, damage the life of humans as well as animals. For example in 2011 Japan face this problem due to increasing sea level. On that time many people had lost the possession of their property as well as their lives. Moreover, if any country faces any natural disaster once then it’s quite difficult to recover it later.

However, where there is a problem there will be a solution also. Global warming is the main root of the rising water level so if we want to stop raising sea level then first we need to control global warming. That will be possible by replanting the trees. Furthermore, the government should construct some dams to control the flood. Apart from that, the government lay down some strict rules which are relating to building the building near the sea zone. So that we can save our lives, individuals, and creatures.

To conclude, video global warming gives birth to all natural disaster such as earthquake, raising sea level, flood and so on but the solution of all problems are controlled the main roots which are global warming problem can be solved automatically.