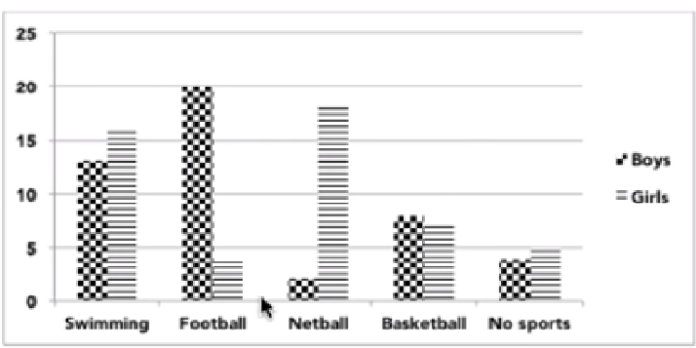 The given bar graph illustrates information about the proportion of Australian children in sports outside school hours in 2014.

Overall, it is clearly seen that the maximum percentage of boys was in the football field and the minimum proportion of girls was in football sports.

The given vertical bar graph compares both gender participation in diversion exterior school hours in Australia in the given the year 2014.

To elaborate, association in football game males were outnumbered with females counterparts with 20% and 4% accordingly. With it, women more participation in swimming on 155 as compare to men less than 2%. As well as, boys were less community in netball at 2% but, unfortunately, girls were on 18% in the given time.

Moreover, furthermore relevant that, Males and females fellowship in basketball almost same at 9% and 8% respectively. Boys participation in no sports 4% rather than 5% at girls.

Overall, women were more distribution in different games swimming, netball, no sports in contrast to men.