The map shows the growth of a village called Chorleywood between 1868 and 1994. Summarize the information by selecting and reporting the main features, and make comparisons where relevant. 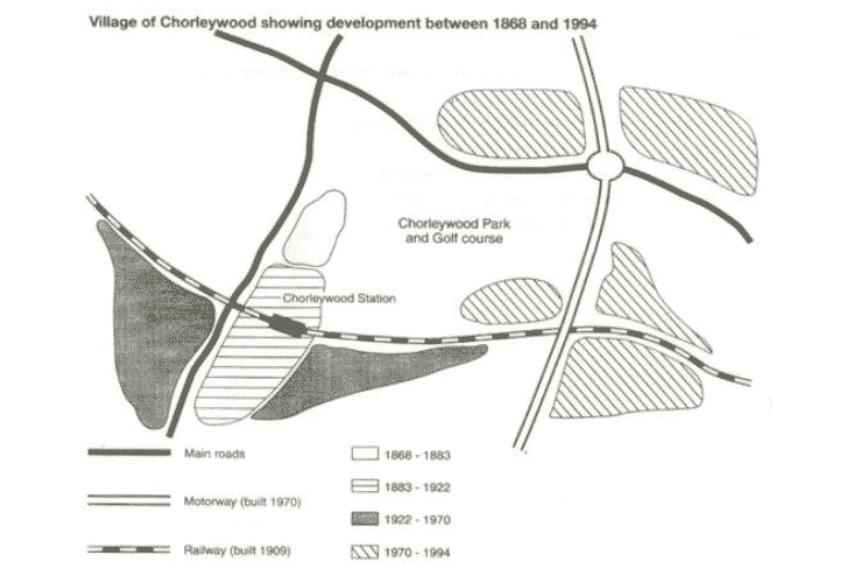 The given map elucidates the progress of Chorleywood village over a period of 126 years (between 1868 and 1994).

It is vivid, during the first 15 years of the given time period, Chorleywood village was small (illustrated as one area). Two main roads were constructed. While one was observed from the northern-west direction to the east, the other one was built from north to east, intersecting the former one on the northern side. A development of Chorleywood station took place near the village, during the time span 1883 to 1922, in the southwest area, and a railway route was constructed in 1909 over the railway station leading from west to east.

Moving further, development at two places was observed near the station from 1922 to 1970. Among them, one was built to the right side of the railway station, and the latter one was made on the other side of the station across the main road. Although, a motorway was constructed from north to south on the right side in 1970. And, from 1970 to 1994, progress at five places took place. While two were in the northeast direction on both sides of the motor route, the rest of the three were built in the southeast direction, where railway lines and motor lines intersect.

All in all, most of the development took place almost at the last of the twentieth century.