The diagram below shows the production of electricity using a system called Ocean Thermal Energy Conversion (OTEC). Write a report for a university lecturer describing the information below. 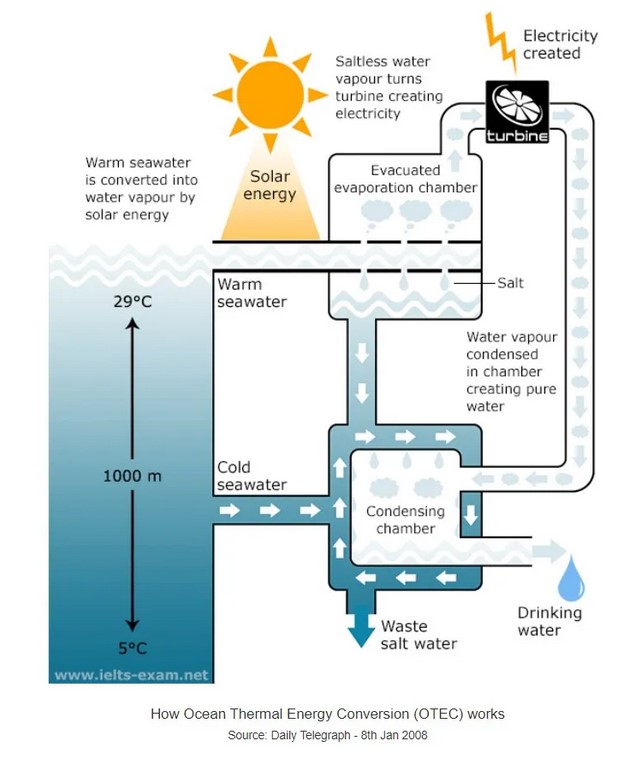 The given diagram describes the process by which power was created by the implementation of a technique called OCEAN THERMAL CONSERVATION. Overall, the diagram illustrates that how solar energy is conserved and then used for the generation of power as well as pure drinking water from the Ocean.

In the initial stage, we can observe from the illustration that ocean water had two different water temperatures where the surface of the Ocean had a high amount of temperature, and the bottom of the Ocean had a lower temperature of 29 degrees and 5 degrees, respectively. By considering the power generation process, natural resources from the sun are used for the whole process, which involves four steps. On account of this, solar power is used by the water surface on the top of the Ocean where saltless water gets evaporated, and saltwater remains on the bottom of the evacuation chamber, and then the water vapour is transmitted into the turbine while the electricity gets generated.

Furthermore, the condensed water In the turbine transformed into the condensing chamber, where the waste saltwater from the evacuation chamber and cold seawater swirl around the condenser chamber and are pumped out from the dispensing pipe. Therefore, pure drinking water had resulted after all this process.