The chart below shows the percentage of young people in higher education in four different countries in 2000, 2005 and 2010. Summarise the information by selecting and reporting the main features and making comparisons where relevant. 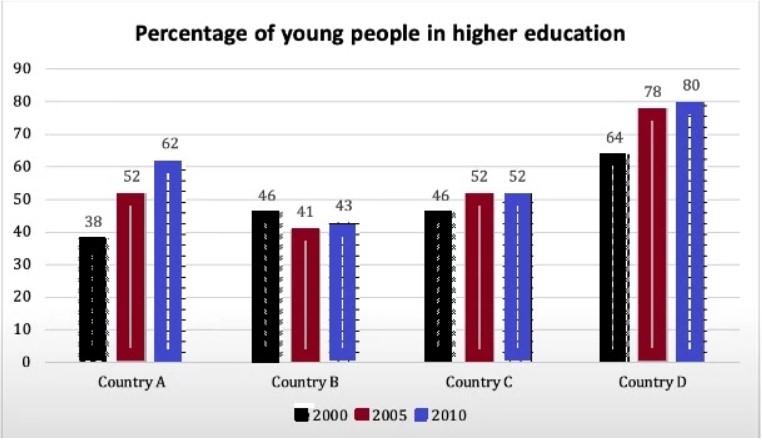 The bar chart presents how young people are pursuing their higher education over a time period. In order to compare, people from 4 countries have been considered for the years 2000, 2005, and 2010.

To begin with, in the year 2000 the percentage is comparatively low with the other 2 years. However, in Country D the youth in higher studies is more than the other 3 countries with 64%. The count in Countries B and C remains the same with 46 per cent with 38 in the A. In addition to it, there is a noticeable rise in the next year 2005 in all the countries except in country B. Compared to the previous statistics, there is a subsequent fall of 5 per cent in country B. Maintaining the same status, again D tops with the highest percentage of youth in higher education followed by countries A, C, and B.

Furthermore, taking 2010 into the picture, the ratio of youth active participation is inclined. Country D stands at the top with 80 per cent. Followed by country A with an appreciable increase as that of previous years with 62%. Countries C and B ranked 3rd and 4th with 52 and 43 respectively. D is well appreciated for maintaining the high percentage in all the years.