The graphs below show the types of music albums purchased by people in Britain. Write a report for a university lecturer describing the information shown below. 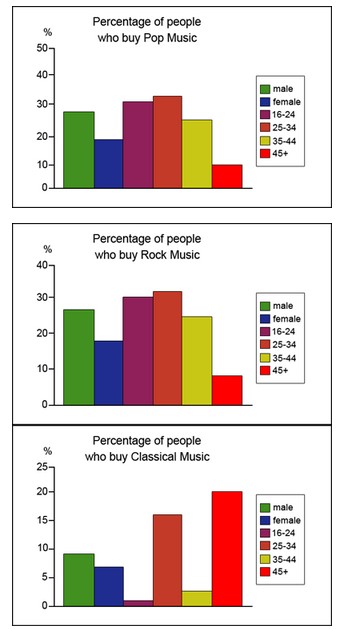 The graphs below show the percentage of people in the United Kingdom who buy pop, rock, and classical music albums based on their gender and age group. In general, men were the most common purchasers of music albums in all genres.

In the case of pop music, purchasers aged 16 to 34 were much ahead of other age groups. Pop album customers between the ages of 16 and 25 were nearly identical to those between the ages of 25 and 34, and they bought more than 60% of all pop albums sold in the United Kingdom. Males bought nearly 28 per cent of pop albums, while females bought less than 20 per cent. Pop and rock music were less popular among people over 45, whereas classical music was their primary interest. There is a noticeable connection between the purchasing tendencies of pop and rock music albums when it comes to rock music album purchases. Nonetheless, rock music was the most popular music genre among both male and female listeners, while pop music was preferred by both.

The bar chart depicts the percentage of different music albums bought by people of Britain.

Overall, this report shows that the percentage of aged 45 and above who purchased classic music increases drastically, but their percentage towards Rock and Pop music dropped sharply. Age 25-34 who buy rock music increases, pop reduces gradually, and classic keeps dropping. 16-24 who buy rock and Pop rose then fell sharply on a classic. Female love rock escalates but male love rock and Pop, then classic decreases in both.

The graph depicts the proportion of people in the United Kingdom who purchase various types of music albums based on their age and gender.

To begin with, the first graph plainly shows that females and persons over 45 years old are less interested in purchasing pop music, with 15% and 8% respectively. Males and people in their early and middle age groups, on the other hand, seem to like music a lot. Pop music, which is the core of the graph, was purchased by approximately 25% of middle-aged persons.

Coming to the following graph, it depicts the percentage of people who buy rock music and return to minerals countries with only 30%, although the elderly age group came in the bottom with only 10%.

The proportion of persons who buy classical music is depicted in the last bar graph. Around 20% of senior citizens purchase classical music, demonstrating their affection for it. Young people and those aged 35 to 44, on the other hand, are less interested in purchasing classical music, accounting for nearly 2% and 3% of the total.

In conclusion, it can be concluded that middle-aged men and women enjoy practically all three forms of music, but those older individuals are more interested in listening to classical music than others.