The graph below shows the average monthly use of health clubs in Miami and Florida by all full-time members in 2017. The pie charts show the age profile of male and female members of this health club. 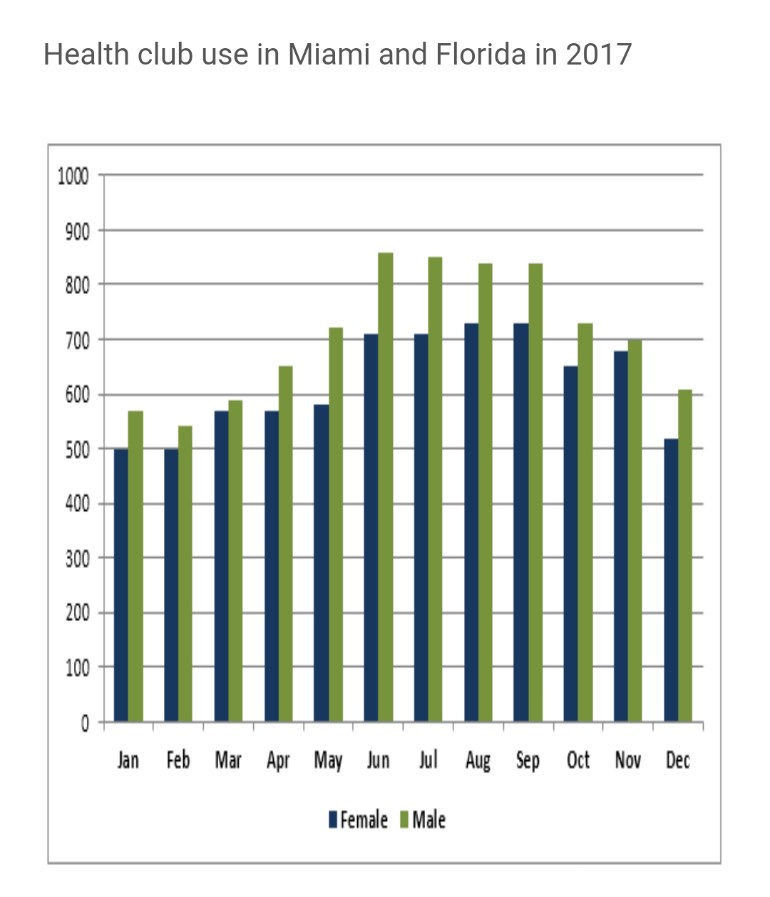 The charts provide a statistical comparison of health clubs in Miami and Florida, outlining their gender and percentage participation by age groups.

Overall, the males recorded the highest attendance all year round, with greater numbers being recorded mid-year whilst the 21-45 year age group showed keen interest in attending fitness clubs among the males. However, though the females documented a lower turnout than their male counterparts, the 65 and above age group recorded a higher turnout than the men.

From the beginning of the recording period, male attendance showed a gradual increase reaching just above 700 in May, then significantly rose in June to arrive at approximately 850, then it maintained a consistent trend until September when it began to decline arriving at around 610 in December slowly. Percentage turnout for male by age group was greatest among the 21-45 year age group which was above half of the total attendance, whilst 65+ and other age groups registered 25% and 20% attendance respectively.

Turning to the females, the participation trend was generally the same as that of their male counterparts though the numbers in attendance were lower. From unvaried participation of 500 in January and February, the females registered a steady increase in attendance until May when a relative rise was noted, reaching slightly above 700 in June.

From June to September, a constant pattern was noted, though with some subtle fluctuations happening between July and August. After September, the pattern continued to vary, reaching just around 520 attendees in December. Similarly, the 21-45 year age group showed the biggest participation at 50%; however, the 65+ years overtook their male counterparts by 6% in attendance.

Also, Read Some Claim That Studying Abroad Has Great Benefits for a Student