The graph above shows information about employment rates across 6 countries in 1995 and 2005. Summarize the information by choosing and describing the main idea, and make comparisons where appropriate. 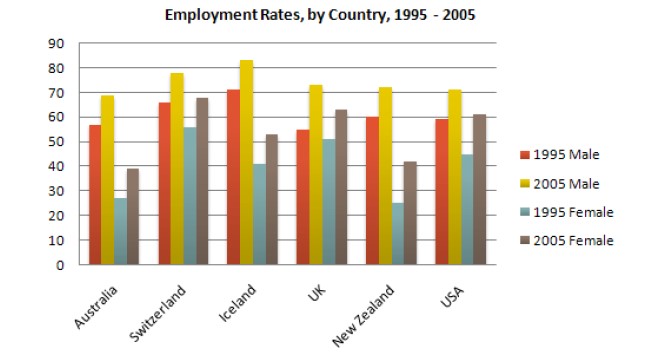 The bar graph depicts information about the employment rate across six different countries during the period of 1995 and 2005.

Overall, it is evident that males have a high rate of employment compared to females during both periods. Iceland records high job ratio than any other country. Secondly, Switzerland shows the highest rate.

During the year 1995, both men and females had a higher rate of work compared to that of 2005. In every country, there is a decline in the rate of employment rate for males as well as females respectively. In Australia, the rate of male workers got a reduction from nearly 55 in 1995 to approximately 35 in 2005. Similarly, Female workers also got declined.

In the case of Switzerland, even if there is a negative variation, the change is negligible as it occurs only at a range of nearly 10. But in the case of Iceland, the declination is noticeable. The rate of male workers is nearly constant in the case of the UK while the female rate is decreased. The pattern of New Zealand is almost similar to that of Iceland, with a large reduction in the employment rate.