The chart below shows the amount spent on six consumer goods in four European countries. Write a report for a university lecturer describing the information shown below. 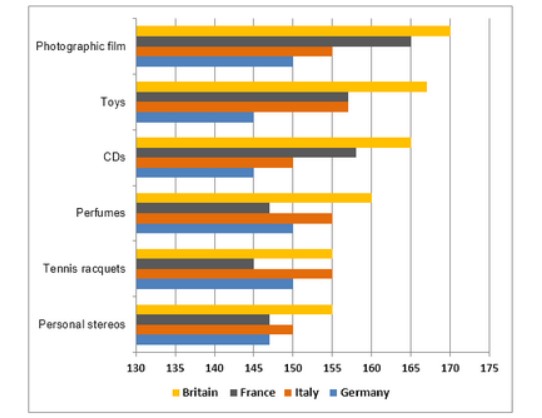 The given bar chart illustrates the money drained on six goods, bought and used by consumers in four nations of Europe.

Overall, it is lucid that Britain overshoots among all the four countries on each and every commodity while Germany has underspent.

It is conspicuous that Britain had splurged more than 155 Pounds on all six consumer goods. Generous amount of money was being enervated on photographic films by the given four countries, and a similar trend could be seen in the case of CDs purchase as well. Italy and France had equally squandered on toys which were approximately 157 Pounds, while allocation utilized by Britain on toys was 10 pounds more than Italy and France, and only 145 pounds were defrayed by Germany for toys.

Probing ahead, for perfumes, Tennis racquets and personal stereos, Britishers and Italians had spent more than the other two nations. Italian people emptied around 150 to 155 pounds for these commodities, while Britain disbursed 155 – 160 Pounds for them. French citizens spent less than 150 Pounds on these three consumer goods whereas the average spending of Germany was 148 pounds.