The diagrams below show a structure that is used to generate electricity from wave power. Summarise the information by selecting and reporting the main features, and make comparisons where relevant. Write at least 150 words. 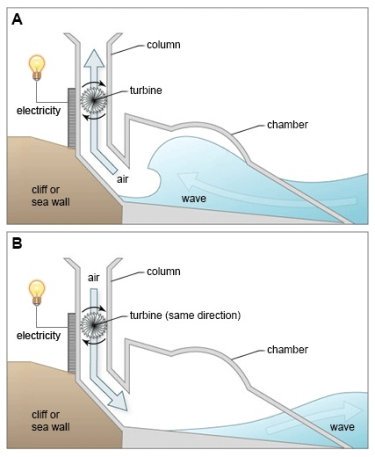 The yielded diagram illustrates the process which uses for generating electricity from waves power. Overall, the whole process is divided into two phrases, and one is when wave direction on the seal wall side, and another is when wave away from clif. Both phrase turbine rotational direction is same.

Generating electricity primary requirements is a turbine which is round shape machinist and connects with the electronic station. Chamber one side is into the water and has space; thus, the wave can enter between it. The turbine is in the centre of two columns. In the first phase, when a wave came to the sea wall side, through chamber air direction is on the sky side so, the turbine rotates clockwise, and it generates power which distributes to the electric station.

In the second phrase, few time later when the wave is on reverse position or direction illustrates opposite side of cliff air also follow it; hence, it also rotates turbine on the same direction as when we come to the sea wall side. It also generates electricity.