# Describe an advertisement that you remember. 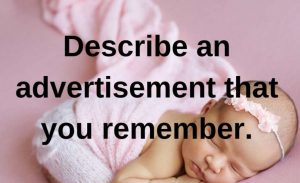 Advertisements are a common feature these days. A big part of the TV series, newspaper, a magazine and so on. I always prefer to watch advertisements related to different types of products, cloth brands, shoes, medicine, movies, cars, and many other products. Out of all these, I like one advertise in particular.

Apart from that, this advertisement for introduced the new product of this company because it is a special Vicks for newborn babies. With it, the ministry of child and mother care of the health department was the sponsor of this ad and advertisement leaves the nostalgia and a heavy heart message.

After it, I saw this advertisement for approximately 4 months. This advertisement was a very creative one and it was not like the most other ads that publicize or advertise their products. As compared to, it was an advertisement dedicated to them and it reminded us that the hardest job in every part of the world. The only mother has done this job in any type of situation.

Moreover, Mother Daycare of their kids with the proper care and dedication. They sacrifice their own wished and well to properly bring up the kids.

At the last, not the least I saw this ad on the fast way local channel. This was a creative at that effectively deliver the message it intended to. It has shown some successful people in history at the end and before that, it showed how mothers are taking care and inspiring dear kids to 2 good things. In the last seconds, it shows the sacrifice and value of all mothers.

I really loved this advertisement and I always remember it very well because it is related to mothers as well as it shows the sacrifice and difficult job which the only mothers do without rest.

I think, there are a plethora of advertisements which we see in our daily routine through the TV, newspaper, billboards, and pamphlets. Here I would like to talk about an advertisement which I see on the television and I remember it well. This is related to the sanitary pads.

A famous Bollywood star Akshay Kumar plays an important role in it. In this ad, one man using the cigarette and he is standing in the front of the hospital. Akshay Kumar comes there and asks from him that why he stands there? Then, that person replied that his wife is ill and she caught by an ailment related to the menstrual cycle of women.

After it, that man says these words the full of attitude. Akshay Kumar advised him that he should avoid cigarettes and purchase a pack of sanitary pads from the market with that amount of money which he spends on cigarettes. Akshay says that women get hurt when they use dirty clothes during their periods time and this causes that women catch by dangerous diseases at an early age. Then that man feels ashamed.

I remember everything about this advertisement because this is broadcasting on every television channel during TV programs. This is one of the popular ads on TV. Apart from it, the voice of this and has been broadcasting on the radio. This spreads the awareness about cleanliness during the menstrual cycle in the ladies.

It is quite evident that every girl or woman who uses clothes during her periods time, she surely catches by a number of ailments which definitely become the cause of death. I remember that once I read an article in the English newspaper named English tribune about the death of one girl who was using the dingy cloth in her periods. I was astounded by reading it.

Definitely, I like this advertisement so much because it awarded to ladies for just their good health. I believe every man has to educate his wife, sister, daughter, and mother to use sanitary pads.

All in all, this ad leaves a profound impact on the minds of human beings, especially on women. So, this is an advertisement which I remember well.

Question:- what do you think is the role of advertisement in the modern world?

Answer:- well, in the 21st century, advertisement is the chief vehicle used by manufacturers and traders to sell their products in the market. With the help of, advertisements the company easily attracts the customer to buy the product which launched in the market and, on the internet.

Question:- Do you think some advertisements need to be banned?

Question:- How do sometimes sellers succeed in selling their products which many consumers do not even need?

Answer:- well, according to my point of view, in certain advertisements fake merits of products are mentioned. That sale of man or women are very clever and they sell their products in a very cleverly way. Sometimes, they easily attract customers with help of smart-talking way. For example last month one salesman came to my home and told me some information related to hair shampoo. He easily convinced me to showed some results on one booklet and I bought that particular product. But, when I used that hair shampoo that did not give me any type of result. These are the main reason.